You might remember me publishing a plan to go to Spain and carve a horn.  If you’ve ever read this blog before, you probably caught that hopeful theme.  For the new folks, essentially I’d set out, two years ago, to begin the curing process on a big stick of pine away off in Spain at this lovely art centre called CACIS, in the hopes that I could return in 2012, and successfully produce a very large horn from that same piece of wood.

So I stuck it in the rafters of their studio, in the back hall, with paint and paper glued over the exposed ends, and went back to Canada.  That was October, 2010.
My 2012 residency began on September 4.  When I pulled out the horn blank (that’s what you call it), it looked as raw and fresh as when I’d last seen it.

Catalunyan pine horn blank next to a saxophone-sized horn called ‘Wa-wa II’. Pre-cut it was well over 3 metres.

I wasn’t certain how pine would work for a horn.  In Canada, pine would not be my first choice because it is too loose grained and soft for a fine instrument.  Nevertheless, the local forest had offered up this irresistible shape with no other options, so here we were.  The next task was to cut it down the middle.  A local superstar woodworker named Thomas was quickly introduced to me, and we had a fine adventure lifting his bandsaw into the foyer of his (very large, very ancient) house in order to do the job.  He even went so far as to fit on a brand new blade, and in mere moments, a very crisp cut was made.

Thomas, his band saw, my project newly bisected, and his many magical staves, all lit by late afternoon Spanish sunlight.

Bisecting done, the rest was up to me.  The task of hollowing the sound chamber is the majority of horn making.   It turns out that pine, owing to a dry climate, grows into quite a hard wood in Spain, certainly in the foothills of the Pyrenees.  My newly forged adze turned out to be entirely useless for the task, and my scoop gouge needed the bevel reground to a more aggressive angle in order to have any hope of finishing in time.
Forty or fifty hours of carving later, two halves were ready for finish carving.

Rough carving done with a mallet and a chisel. The edges must be carefully guarded to remain as pristine as possible. Also, the halves must be tied together at night to minimize warping. Lordy, what a load of work.

*Hey, if this part is getting too woodworker-nerdy, just scroll down to the bottom where there’s pictures of me drunk and yelling.

Next comes the interior finishing with a curved knife.  About this time the other Canadian artist arrived.  She said, ‘Wow, I can’t believe how far along you are!’  In my head, the remaining stages lined up into the future, easily eating up all the time remaining.  ‘Oh yeah.’, I said, ‘No problem.’                 Carvity-carve carve.

You can make out the shine of the initial coat of varnish, and a cloth patch to reinforce a very thin section around a knot.

At the same time as all of this, many other projects are on the go in the studio.  A felt hat, for example is being made into the removable bell for this horn.  More of a craft project than proper woodworking, so I won’t go into exhaustive detail, though I want to note that my days are running out, and the band is due to arrive in a week or so at this point.

Soon it was time to join the finished halves.  This was a daunting task, as the wood glue dries fairly quickly in a hot climate.   Spreading a thin coat on all four surfaces must happen quickly so there is enough time to set the tourniquets in place with the edges lined up. 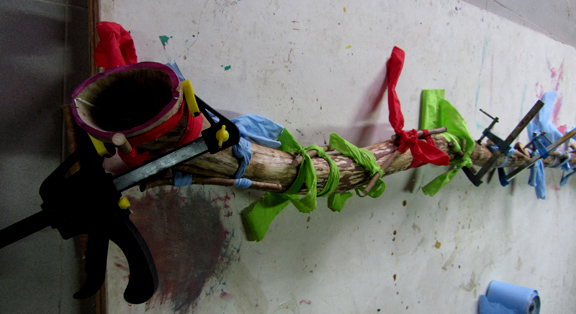 Sixteen tourniquets as tight as can be made without breaking, plus four clamps because that’s how many I had holding two freshly glued halves equals one new honker.

It all sounds very promising, but were not done yet.  Now for the outside finishing.  Plenty of wood left to be removed, then strapping it every foot or so with belts of veneer,  and a pair of feet to hold up the wide end while you are playing.   Next is varnishing inside and out, two coats minimum, three on the outside if you can.

Despite having a very large, beautiful studio all to myself, this patch of ground under the almez tree ended up serving as a satisfying workspace.

Somewhere in the midst of all this carving, I’ve been making friends with the locals.  My hostess, Roser Oduber, has booked me two speaking arrangements with the regional music schools where I end up jabbering in Spanglish about my horns and making a giant racket with as many volunteers as possible, to the amusement of all.

After two school visits, a fella couldn’t go into town without being spotted. But I don’t really do anonymous even on a bad day. Two students actually took me up on my offer to join the band for our planned concert at the Festa de la Verema on Oct.7th.

Once the horn was done, it was time to practice.  My new pal, local culture legend, Valenti offered to get in as many hours on the new horn as he could, and promptly showed up every day around 4 pm, right up to the day of our first performance at CACIS on October 5th.

Product shot! You can see the hat/bell stuck on the end. The sound was more than I expected with big volume, but also very lovely and numerous top notes.

It gets a bit fuzzy after this.  The band arrived in a whoosh, and pretty soon we’re into the sauce and festivities like there’s no tomorrow.  Just a word of advice to adventurers bound for Catalunya:  caution on  competimg with the locals when it comes to the drinking, though they might cheer you on.

Dare you to spend a month in Catalunya (where the food is delicious, the beer is 50 cents a can), and then pose in a black and white striped shirt showing off all the contours.

Once they get you really shit-faced, then they’ll wrap you in the flag and expect you to mug for the camera. No problem.

The new album cover. Following this was an impromptu singalong, and, I think, some more refreshments.

Perhaps we’re off track on this horn report.  But really, this is a picture of success.  The project has, by this time, appeared successful enough for a great deal of celebration.  But we weren’t done yet.  The following day at 6pm, about three quarters of the way up the hill in lovely downtown Artes, we played a spectacular photo-op concert to the extremely participatory folks at the Festa de la Verema.  The streets were packed with thousands of revelers, and many familiar faces stuck around for both sets, including the two music students from the local school. 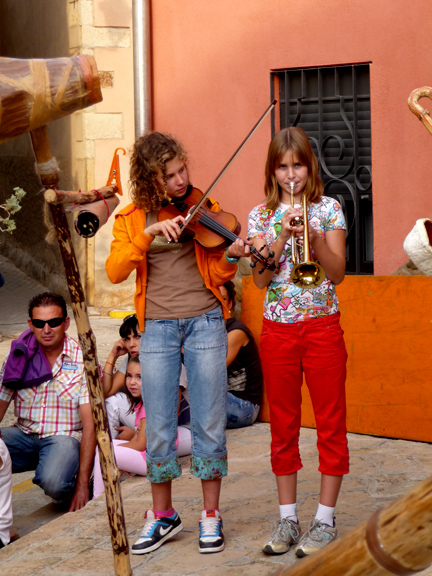 We didn’t have time to practice with the new recruits. I said, ‘Guarde el ritmo!’ or something like that, and they held their own just fine. 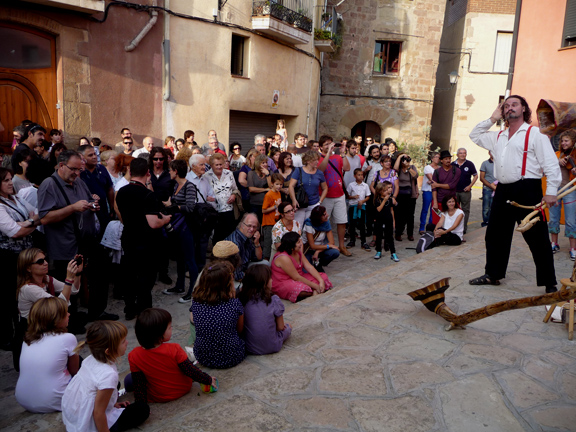 Turns out you don’t need to know English to sing along with our music. People respond to gestural prompts in any case.

There’s our best band shot, complete with Valenti giving it all he’s got.

Before we parted, many hours later toward the end of the festival, Valenti reassured me that he would make a good mounting for the horn, somewhere at CACIS, and take it down on special occasions for necessary loud moments.  He didn’t phrase it that way, but we understood each other quite well by that time.
Not surprisingly, I wanted to cling to him and never leave Artes.

Good project.  Sign me up for one-a those again.  Hey, we’re doing a show Nov. 5th at Kino cafe.

Because you want to come out on a Monday night.