Before memory fades to a dream, I want to at least make a few islands of imagery from what photos I’ve got left on my camera.  For those of you who are just joining this feed, my band, my wife and I just went to Spain for purposes of art and music.  This tidbit of imagery is from the day after Jason Harder arrived, October 2nd, when the rest of the band was due to appear in three vehicles, from two directions.  As the roads into the art centre, CACIS, are very rural and not easily navigated with even satellite technology, some judiciously placed signage became necessary.  Ergo, this morning walk before the heat of the day set upon us.

The little town of Artes, about an hour and a half drive north of Barcelona, is yet uncorrupted by tourism, though it is both pretty at the moderate age of 1000 years, and culturally rich.

The landscape in this part of Catalunya is the foothills of the Pyrenees mountain range, a very dry climate that has been optimal for viticulture for many centuries.  Evidence of terraces pervade every square meter of the surrounding forest and in any direction one cares to walk.   About 130 years ago, a horrible infestation of bugs ravaged through all of Spain.   Having already devastated the grapevines in other countries, it wiped out the industry in Catalunya in less than ten years.  Catalunyans have known suffering.  Don’t even get me started about Franco. 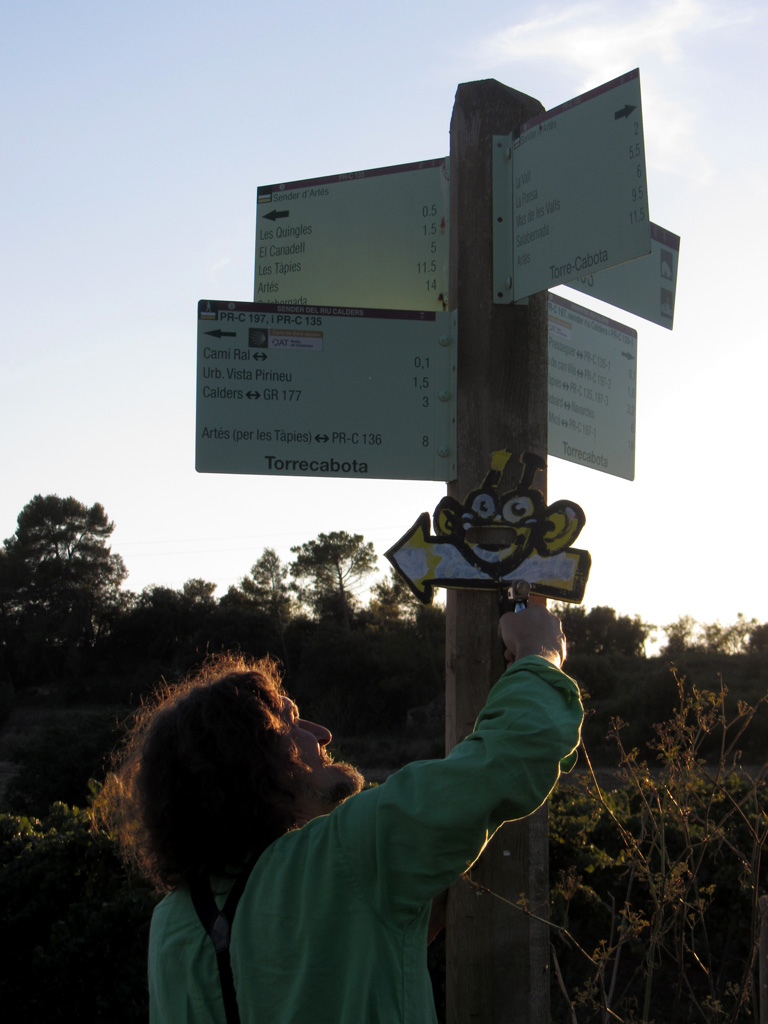 In Catala, I am called ‘Home de Foc’, here with Corporate Identification Roadsign #2

In September on the 11th, Catalunyans set a new world record for demonstrations with two million people (the police count was 1.5 million) gathered on the streets of Barcelona calling for independence from the rest of Spain.  As a gesture of support, I think we should help Quebec separate from Canada.   It’s not like we couldn’t still visit.

The signs worked.  Soon everyone arrived in a whoosh, and I was surrounded by merry band mates with unbroken horns, an immense relief.  The party began in earnest with many libations and foodstuffs aplenty, tongues wagging until we all crawled to our beds, a fine day having passed.

The Mighty Landrew tests his newly assembled travelhorn, ‘the Italian’ in the studio at CACIS (Centro del Arte Contemporani i de Sostenibilitad).

The pieces of our documentation are still coming together.  I hope to have sound bites soon, that I can share them with the world, and you, good and patient reader.  Until then.