The veritable man holding the comet’s tail.  Not two (miserable) weeks after she left for her five week residency in Catalunya, my dear wife, Sharon calls me up to inform me of two surprise news items:  1 – she has just won an(other) award for her art, and 2 – with the award money, she wants me to come to Spain, now! ‘Now?’, I sais, ‘As in now?’.  ‘Yes.  Buy a ticket, right now.  As soon as you can get here.’  The following three weeks were a blur of racing to get the house and the dog in order, travel with a surreal jet lag to plant a zombie-version of myself into a far off place, and the growing realization that I’ve awoke in a kind of art-paradise. 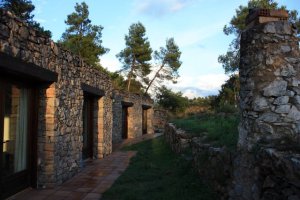 Joan and Roser have an art center in the woods about 60 km due north of Barcelona.   C.A.C.I.S. (Centre D’Art Comtemporani i Sostenibilitat) is hard to believe, even having visited.  On the sight of old lime kilns and a quarry they’ve renovated a farmhouse for their home and studio and built the art gallery and the artists’ studios into the hillside above said kilns.  This hillside is terraced from many hundreds of years of grape cultivation, now a pine forest with oak underpinnings, all of it, dedicated to a growing sculpture park under the patronage of Joan and Roser.

When I arrived, Sharon was in mid-swing, so to speak, nearly finished her first big piece to install.

‘Listen’, she said after it was finally standing sturdy and we’d rolled the giant rock across the hill to make a seat inside.  ‘Any work you can do on the other one would be great.  I want them both ready for when the kids get here.’

The ‘other one’ was still only a concept with a pile of material available in the form of grape trunks and their recently detached vines.

Nevertheless, it was done, and done well by the time the school kids arrived for art class.

36 of them.  36 eight and nine year olds descended upon us that day.  Honestly, we were all a bit scared.  But it wasn’t long before we were happily busy making found object mosaics, molding clay pots, or pounding out a beat on the giant xylophone.

The installed art pieces were a huge hit!  When the kids caught sight of each one, they stuffed themselves inside with reckless abandon.

A long day, to be sure, but a special kind of exhaustion follows such moments.

The plan now is to return in 2012, with my band.  We’ll play at ‘Festival Gong’ in the caves at Montserrat, and hopefully make a multi-disciplinary art/music event at CASIS itself.  For my part, I’ve begun a large horn cut from the hillside above the art center.  I left it, the horn blank, drying in the rafters of the back room of the studio there in Spain where it can dry slowly in a temperature controlled environment.

For Joan and Roser, I made a gift of the mouthpiece made from local Almez, in the hopes they will look forward to the first honking and our return.

If you, good reader, have not yet seen the photo collections from Sharon Kallis flickr site, please follow this link:

And now, back to work.  Did I mention it’s almost time for Clown Parade?  Send me a message if you want to come along.

One thought on “Spain Report!”